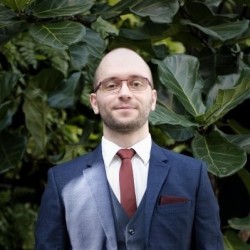 Recently, I had to convert a printer-styled range string into the corresponding list of selected elements. This made for a nice case study on Python class properties, iterability, length, and attribute/method privacy.

So, there’s this script of mine that some colleagues use to convert microscopy images from the microscope vendor’s proprietary format (we have a Nikon one in the lab, so some nd2 files) to an open source one (.tif in this case).

Recently, I have been asked to add a feature to this script. They would like to be able to convert only some fields of view. To do this, I decided to use a range string format that is ubiquitous, OS-independent, and widely used everyday: the printer-styled range string.

So, I needed something to validate, parse, and convert a printer-styled range string into an actual series of numbers. The desired behavior would be to convert 1,3-6 into [0,2,3,4,5] (remember, Python is a 0-indexed language).

To do this, I implemented a Python3.6+ class, MultiRange, that I then published as a Gist on GitHub (see below). I will break it down and explain it bit by bit below.

The class has only two dependencies from the Python standard libraries:

As you might have noticed, all attributes start with two underscores __. In Python (according to PEP8), this makes them ‘private’, i.e., inaccessible from outside the class through name mangling.

The __init__ method creates an instance of the class and takes the printer-style range string as input (s). The first thing we want to do is validate the input by checking it against __reg, and stop otherwise by raising an AssertError.

After that, we store the input string in __string_range and split it into elements by using the commas as delimiters and removing any terminal white spaces.

Then, we sort the list of tuples we created by their first elements, and clean them up. Basically, this cleaning operation is meant to avoid overlaps between tuples (see the next section for more details).

Finally, we verify that the first tuple does not start with a 0 (page numbers start from 1) and tell the class that it is __ready to be used.

After converting the input string into a list of number pairs (as tuples), each representing a range of pages from the first number to the second one, both included. You can imagine any of these pairs as a (start,end) element.

Before proceeding, we want to be sure that every page number will be provided only once. In other words, all these ranges should not overlap. We achieve this by iterating through the the list of (start,end) elements and comparing each pair with the next pair and see if they overlap. For this to work, it is crucial to have the list of pairs sorted by their start element (which we did in the __init__ function).

Now, when are two pairs overlapping? Given that the first pair (A) has a start (A[0]) that is always lower than or equal to the start of the second one B[0], this can happen in two ways:

It is important to distinguish these two scenarios because they require us to act differently:

Every time we found overlapping pairs, we resolve the conflict, and restart from the beginning of the list. Only when we reach the end of the list, we can say that it is indeed clean and ready to be used.

We want to be able to know the length of our MultiRange instance. But given that this requires some computation, we want to (1) calculate it only if the MultiRange is __ready to be used, (2) calculate it once, (3) store it somewhere (self.__length), (4) read the stored value at any future call of the len function.

To provide a hook for the len function and make the len(MultiRange("1,2-6")) code work, we need to define a __len__ method. The method returns an integer number: the one we will store in __length.

We do not want anyone to be able to mess with the stored value, that’s why we store it in the private attribute __length (notice those __ at the beginning!). But we want a user to be able to access it without having to call the len function. To do this, we define a class property with the @property decorator.

Basically, every time the user calls MultiRange(" 1,2-6").length it will trigger the property. This will check if the class is ready (self.__ready) and if no length value has been previously stored (self.__length is None). Only and only in this case it will calculate the length value and store it in __length. Otherwise, it will return the default length value: None.

To calculate the MultiRange length, we calculate the difference between all range extreme pairs (a,b) and sum 1 to each (as they should both be included): b-a+1. Then, we sum them all and store it in __length!

How to iterate over the MultiRange elements?

What is an ‘iterator’?

First things first: what is and iterator? Well, in Python we can have iterable (1) and/or iterator (2) methods/classes. An iterable contains elements that can be iterated over, while an iterator is used to iterate over an iterable. According to PEP234:

Notice that, when a class is an iterator it is, per definition, also iterable. The vice-versa is not true: not all iterables are iterators. While the wording might be confusing, the concept is quite simple. Since an iterator iterates over the elements of something, one could iterate over its elements, which makes it an iterable too. On the other hand, one could potentially be able to iterate over the elements of an iterable only if an iterator is available.

Making your own Python iterator

So, now that we know what an iterator is, how can we make our MultiRange class into one? It’s fairly simple: we implemented two methods: